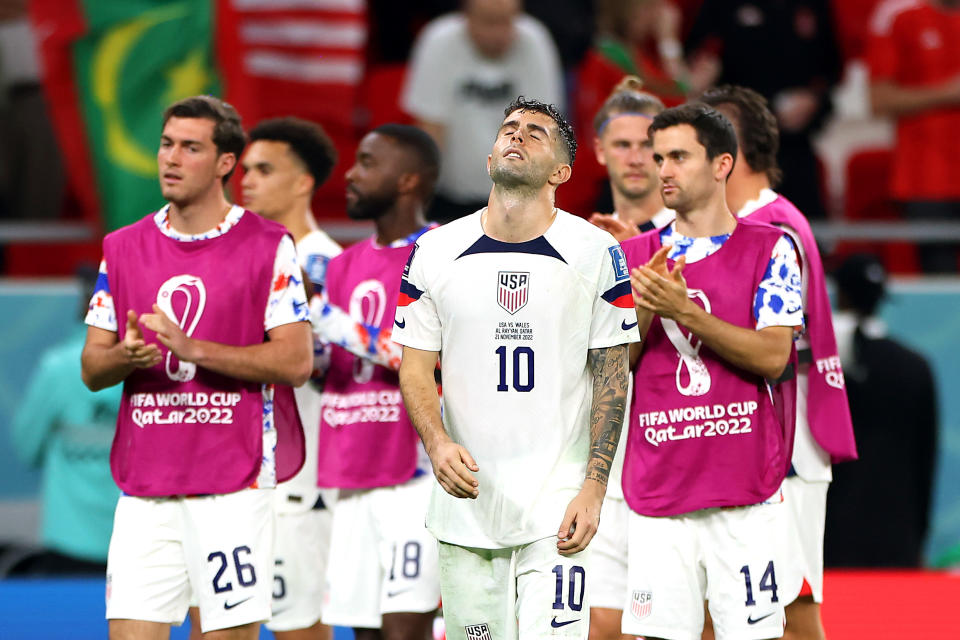 For those stuck at work or school, or perhaps whose only awareness that the World Cup was about to begin was that Qatar had banned Budweiser, the end result will evoke familiar feelings.

A tie. That was it, a 1-1 draw? Another World Cup tie, an inflated late lead for an aging team representing a part of the United Kingdom roughly the population of Iowa (3.1 million) appearing at a World Cup for the first time in 64 years?

It doesn’t exactly inspire confidence, let alone attention. We should be better than this. Points remain on the table. Potential to wilt in Qatar heat. It was so familiar that someone could start with the old tired trope that the US will never be a good team until our best athletes play football, not basketball or soccer.

So yes, doubt is an understandable emotion as the USMNT has only won two World Cup games in the last two decades. Another draw and another international competition where beeping out of group play won’t help.

Make no mistake, this was a bad result for the Americans, a frustrating one because they were the better team on Monday, often much better. They should have won 2-0, 3-0 and a real team, a real contender, would have pulled that off.

Instead, the USA missed numerous goal-scoring chances, wasted a string of impressive performances and made a clear 82nd-minute foul on Gareth Bale in the box to concede a penalty the Welsh legend had waited a lifetime for to bury.

The US should never have conceded that goal or endured a frenetic final 20 minutes of regulation or stoppage time.

It should have won.

It didn’t. It now increases the pressure for Friday’s game against a much more challenging English team.

This was another type of American team that delivered that very famous result. The start of the game showed what this group of American players can be, should be and probably will be.

They were brutal. They were aggressive. There were pieces of domination. This was a fast, young, exciting and attacking team. This was 24-year-old Christian Pulisic who in every way showed the superstar he was long promised, only now while the country watches.

This was the kind of football team that appealed to American sensibilities – confident and charismatic. It’s a group the country could potentially rally around, regardless of their tech savvy.

For too long, the US has been in major international competitions and chasing them, just hoping to survive, just hoping not to be humiliated and then explaining away often boring and limited results. For too long it felt hopeless.

Stereotypically, there are two types of international sports for the average American fan. The ones we’re good at and the dumb ones. The country is not exactly inclined to settle for limited success, to just be there.

That was not the case against Wales.

From the start, the Americans were the assertive side. They had better players, better possession, better pressure. They outclass the Welsh with youth and creativity and sheer strength.

It was Wales that stayed behind trying to survive and praying for a counter-attack. They got the call they needed and that keeps them alive. But they weren’t the better team.

This is everything you want to get out of US Soccer in terms of style. It was everything American football fans begged to see. They need to bring it to 90 minutes, they need to be more consistent, but at least this was something.

This country has too many kids playing the sport, too many great athletes, too many young talents in major professional leagues to be anything but a darting, daring side. That’s why that basketball and football cliché has become so tiresome.

The US has always been athletic enough. Lionel Messi stands 5-foot-7. Neymar weighs 150. These are not fields full of LeBron Jameses or Tyrek Hills.

But they didn’t play as often as Americans often do. Too often the team was meek and lacked the self-confidence, even if it was unfair, that the country deals with. That changed on Monday. Pulisic was an important part of it, a mega talent with unlimited motor skills. But there was more. Timothy Weah, who scored in the 36th minute. Tyler Adams. Weston McKennie. Jose Sargent. And so on.

This was a 180 of the listless, lifeless pre-Cup friendlies that spoke to the same old, same old.

If they can get this going, if they can get into the knockout rounds, this could be a team that the Americans can finally really rally behind. If …

The US did not win on Monday, as they almost never win in World Cup matches. However, they deserved it. They should have.

That is not enough. It should never be enough.

However, it was something else, even if the score suggests otherwise.