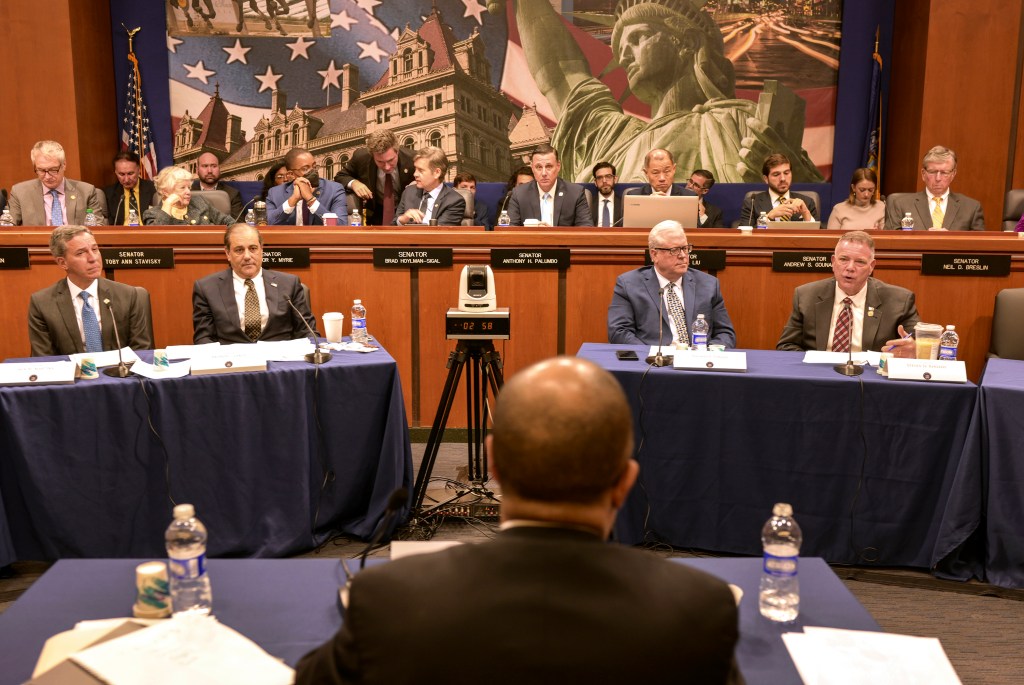 The Democrats in Albany, at least some of them, seem to be on a self-destructive mission to cannibalize our party and make our candidates lose more in each successive election.

The latest example? The orchestrated public humiliation by the Senate of Judge Hector LaSalle, a lifelong Democrat with a stellar professional reputation. The Senate Judiciary Committee voted 10 to 9 on Wednesday to nullify LaSalle’s nomination to become the state’s chief justice — all 10 nos coming from colleagues Democrats.

The show gave lawmakers the added benefit of embarrassing Kathy Hochul (the Democratic governor who just approved their big pay raise) since LaSalle was her nominee. The Senate flexed its muscles to show the world who’s boss — and deliberately undermined New York’s first female governor as she begins her first full term.

Some blame Hochul, saying she failed to provide early support or twist the right arms. Could be. But I’m not blaming the victims here. I put this squarely on the Senate leadership, which seems desperate to get approval from the cool kids on the far left — even at the expense of some of their own Democratic colleagues.

Remember, in the midterms of 2022, Republicans flipped four New York congressional seats and several Long Island state legislative districts, gaining ground in each of the state’s 62 counties — largely because leftist policies like the bailout reform bills in New York knocked out moderate reforms. Democratic voters, as well as newer Asian and Hispanic voters.

I have no doubt that LaSalle, a Long Islander and Brentwood HS graduate with a reputation as a consensus builder, is well qualified. He now serves with distinction as chairman of the New York Supreme Court’s Appellate Division, Second Division, and presides over the nation’s busiest and largest court system. You don’t just get a job like that. And LaSalle, whose parents are from Puerto Rico, would make history as the first person of color to head the state’s Supreme Court and oversee the judiciary.

Hochul’s choice of LaSalle was not some out of the blue curveball to provoke the left. The selection process was conducted, as is customary and by law, by the state Judicial Appointment Committee, which sent seven candidates, including LaSalle, to the governor. Hochul made her choice.

The response from activists was sudden and swift. LaSalle had been a prosecutor at the Suffolk District Attorney’s Office several times. For the far left, that’s a disqualifying foul right out of the gate.

Subsequently, some of his procedural decisions were plucked from his long career and then mischaracterized to falsely portray him as anti-choice and anti-union. And that’s just not true.

The Senate leadership clearly made a decision well ahead of Wednesday’s vote.

“I don’t see this ending the way the governor wanted it to,” Senate Majority Leader Andrea Stewart-Cousins ​​said on a podcast more than a week before the vote.

Perhaps to keep the votes lined up to please the left, Stewart-Cousins ​​piled the committee with three extra Democratic senators (and only one Republican) — with the three extra Dem “no” votes ensuring that the LaSalle nomination went south.

Now left-wing politicians tell Hochul what they tell other Dems when they don’t fall in line: They call her a closed Republican. “Dem senate supermajority need not tolerate @GovKathyHochul acting like a Republican,” Senator Jabari Brisport tweeted.

It’s important to note that this is the first time, even in hyperpolitical Albany, that a governor’s choice for Supreme Court has been defeated. These nominations had been approved in the past, even when the Senate and the Executive Chamber were controlled by different parties.

So what does Hochul do now? She said she is considering a legal move to allow the entire Senate to vote on the nomination. That is good. She needs to flex her own muscles and flex them quickly or it will be a long and demoralizing four years – for her, the Democratic Party and the state.