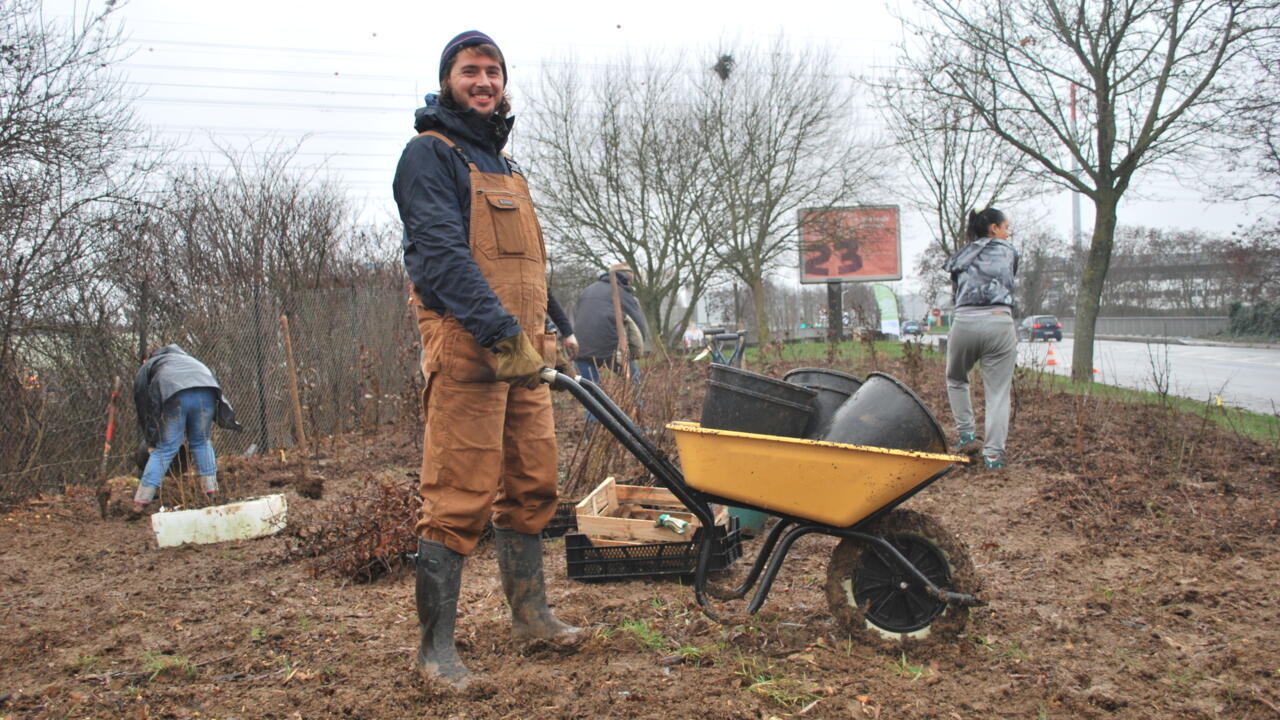 French volunteers are using a pioneering Japanese tree-planting method to create pocket forests in Paris in hopes of slowing climate change, creating biodiversity hotspots and tackling the growing number of heat waves in the capital.

On a damp Saturday afternoon in a southern suburb of Paris, a 9-year-old boy wields a spade to plant a sapling on a deserted strip of land.

It is not much bigger than the young tree it is planting. The rain of the afternoon has churned the ground beneath him into mud. He throws his shovel aside and cleans the clay soil with his hands.

Together with his proud grandmother and his fellow volunteers, he is planting a mini-forest, also known as a pocket forest, along a busy highway near Chevilly-Larue, 9.3 kilometers south of central Paris.

The French non-profit organization Boomforest has organized a tree-planting initiative in which a dozen volunteers of all ages, dressed in hats and boots, brave the cold and rain.

Grazia Valla, 79, a former journalist, said she “seized the opportunity with both hands to do something concrete” on climate change and showed her grandson how to plant trees.

“He loves going to the community vegetable garden,” she said, casting a loving glance in his direction. “When I take care of him, he always screams to go there.”

“Not every child has the chance to see how vegetables grow and taste them,” she said, applauding the initiative. “We are very interested in everything that has to do with nature.”

Maxim Timothée, 31, was happy to be outside and was motivated by the simple, symbolic act of planting a tree.

“It feels very special to plant a tree,” he said, pausing after carving in the damp clay. “It’s not just any object. I feel connected to the life of this tree. I want to protect it. I planted it.

Despite the gloomy weather, Timothée said it felt good to take action, rather than just brooding over the issues of climate change and the sharp decline in biodiversity at home.

Mini-forests were first developed in the 1970s by Japanese botanist Akira Miyawaki, who studied the remains of ancient forests that grew around sacred temples and shrines.

Miyawaki found that they not only thrived without human intervention – they were richer and more resilient than more recently planted forests.

Miyawaki then tracked the planting of more than 1,500 forests worldwide and claimed that a forest of just 100 square meters could harbor exceptional biodiversity.

Proponents of the Miyawaki forests have adapted and spread his methods around the world as cities try to curb the effects of climate change, restore degraded land, create biodiversity hotspots and sequester greater amounts of carbon.

Forests the size of tennis courts have been planted in Beirut, in cities in Asia, across India and, increasingly, across Europe.

Paris planted its first mini-forest on the northern edge of the city ring road at Porte de Montreuil in March 2018 with Boomforest’s subsidy from the French capital’s participatory budget.

“Ninety-five percent of the trees planted there survived,” said Guillaume Dozier, 33, a regular Treeforest volunteer, as he carried compost in a wheelbarrow to mulch the soil around the newly planted saplings.

“The trees are now almost four to five meters high,” he reports delightedly, adding that biodiversity in the mini-forest is now thriving.

“Each time we go there, we see more and more insects and birds that weren’t there before,” says Dozier, explaining that they were setting up a program to monitor the species that gather there.

Motorways are “an extremely hostile environment” for birds and insects, Dozier says over the roar of traffic, explaining that the Val de Marne authorities had given them the roadside land to plant the new forest.

By mimicking the same richness and density of a wild forest, the new trees will provide shelter for hundreds of small mammals, insects and birds, Dozier continues.

Unlike artificial forests planted for timber production, where the trees are laid out in neat lines and planted 10 meters apart, trees in Miyawaki forests are planted close together.

As many as three trees per square meter were randomly planted along the highway, with the slender saplings close together.

Planting a single tree has been shown to have the same cooling effect as 10 air conditioners. But trees are social and do much better when planted in the company of other trees, Dozier explains.

“They shade each other and can exchange water, nutrients and information. If one of them is attacked, they can warn the others. For example, they make their leaves bitter, making them less edible for the attacker,” he says.

All saplings are local French species. Locally, the City of Paris defines French native plants as those in the region prior to AD 1500, Hannah Lewis explains in her book “Mini-Forest Revolution: Using the Miyawaki Method to Rewild the World.” But the Boomforest team did additional research to make sure their trees and shrubs were the most locally adapted species and would coexist well.

Oak, ash, beech and willow are planted in the center, while shrubs such as hazel, holly and charcoal are planted along the edges. Only 15 different plant species were planted that weekend, but no fewer than 31 local trees and shrubs were planted in Boomforest’s other projects.

Proponents of pocket forests also hope they can make a city as close as Paris more habitable in the heat.

In the summer of 2022, Paris sweltered in three consecutive heat waves for a total of 33 days, and temperatures in the French capital reached near-record highs of 40 degrees Celsius.

The lack of trees and the shade and tranquility they provide – Paris has about 9% tree cover – was noticed as the city became an oven.

Parisians languished in the cobbled streets of the city as the asphalt, concrete and metal of buildings soaked up the searing heat and radiated it back out again.

Paris City Hall has pledged to plant 170,000 trees in the French capital by 2026. old plane trees in April last yearto make way for garden spaces drew the wrath of environmentalists, among others Aux Arbres Citoyens and the GNSA, anti-tree cutting groups.

Green activists also say newly planted saplings no competition for the cover of a decades-old treeand that young trees are particularly vulnerable to drought.

Critics of Miyawaki-style forests add that mini-forests are expensive to plant and the science behind planting them in Europe is not robust enough. A 2010 study of a mini-forest in Sardinia, one of the rare studies on mini-forests in Europe, estimated the tree mortality rate after 12 years to be between 61 and 84 percent.

Despite the Parisian authorities’ apparent enthusiasm for planting trees, Dozier admitted that finding space for them in the city center was difficult.

“Paris is a bit of a museum,” he said wryly, adding that mini-groves have been planted only at the gates of the city, at La Porte Maillot and La Porte des Lilas.

He hopes that one day they will have the chance to plant a mini-forest in the heart of Paris, adding that they were adapting their tree-planting methods and learning all the time. He also hopes that others will decide to plant their own forests, and that those concerned about climate change will be encouraged to take action. Downloadable step-by-step forest planting instructions can be found at J’agis je plante (I act, I plant), on the Boomforest website, and other mini-forest groups in France, such as MiniBigForest and Toulouse in Transition.

By late afternoon, the rain had increased. But the enthusiasm of the volunteers did not seem to wane. Nearly half of the 250 square feet they planned to reforest that weekend had been dug up and dotted with saplings. When Boomforest’s budget allows, they hope to return to plant more on the total 800 square feet they’ve been given.

Over the next few months, in the spring and then into the fall, Boomforest’s permanent volunteers return to the newly planted forest to remove any weeds that could compete with the young trees and monitor their progress.

In just three years, the new forest will be autonomous. Boombos hopes that in 10 years it will have the appearance of a 100-year-old natural forest.

Valla hopes her grandson will return to the forest in the spring and in years to come.

“I hope he comes walking around here and says, ‘Hey, I really did something here’.”