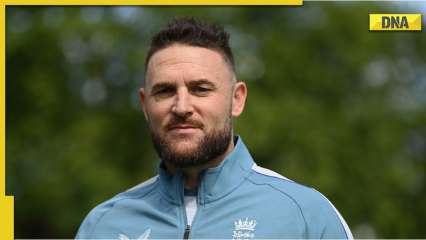 England Test head coach Brendon McCullum has revealed he initially “didn’t really want the job”, but now that he’s at the helm and the squad is doing exceptionally well, he “loves it”.

McCullum resigned from Indian Premier League (IPL) side Kolkata Knight Riders after the close of the 2022 edition after being approached by the England and Wales Cricket Board (ECB) to take charge of a despondent Test side. But after the New Zealander took on the side’s coaching duties, England have won six of the seven Tests they have played, with his positive and aggressive approach earning him accolades.

Before McCullum took over, England had two wins in 18 games, with the side losing the Ashes series Down Under 0-4 and the away series against the West Indies 0-1.

“I didn’t really want the job at first (but) now that I’ve got it, I absolutely love it,” McCullum, who took over after Chris Silverwood’s departure, told SENZ Breakfast on Wednesday.

“It’s good craic and the guys are great. I thought they were good in terms of skills. I didn’t quite realize how good they are, not just the first batch of players, but the talent that comes through English cricket.”

“As long as it can be put to good use, and there are some challenges around these T20 competitions around the world and I think I won’t say steal because the guys get a chance to go away and make good money and that , but they are definitely poaching some of the more traditional types of players.

“That was one of the challenges for me, I think I’ve been lucky enough to be able to make a good living from the sport and have been involved in some of those T20 competitions, but test cricket for me has always been kind of true. around,” McCullum added.

McCullum added when he came into the England lineup it was a bit difficult as he had first taken on the role of handling a test side, but now that he’s been at the helm for several months things are going great.

“Now to be pushed into a position where you can have some influence on the current crop of Test players and especially English cricket, which is a significant force in world cricket, was the challenge I looked forward to,” said McCullum. “To be honest it couldn’t have started much better than it is now.”