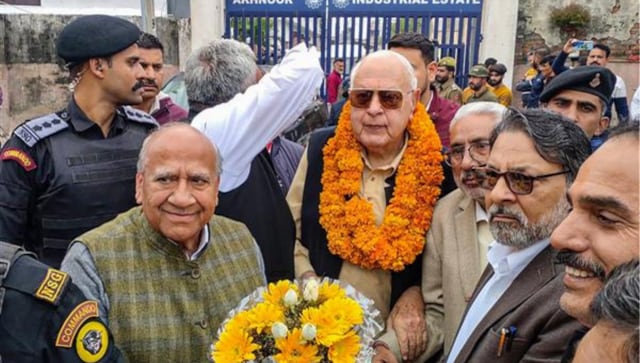 Achnoor (Jammu and Kashmir): Former Chief Minister of Jammu and Kashmir and National Conference (NC) President Farooq Abdullah has made a big statement about Lord Ram. He said that Lord Rama belongs to everyone and not just those who belong to Hindu religion.

“Lord Ram belongs to everyone. Some people say Lord Ram is their own. I want to say to them: Lord Rama is the Lord of the world. Lord Ram belongs to everyone. He is also the Lord of those who do not believe in God. It should be clear that we must walk together. No religion says you have to be dishonest. All religions tell you to do what is right. No religion is bad. People are corrupt. If we know our religion, we won’t feel bad about other people’s religion,” said the National Conference (NC) leader.

Farooq Abdullah made the statement while targeting the BJP during a factory inauguration program in the Akhnoor district of Jammu and Kashmir.

“They (BJP) will often use ‘Hindu is in danger’ during the elections, but I request you all not to fall into the trap. India has a 70 to 80 percent Hindu population and do you think they will be in danger? If we want to make our country strong, we have to join forces,” said Farooq Abdullah.

Farooq Abdullah reiterated the need to hold elections soon in Jammu and Kashmir and said, “We have been promised 50,000 jobs here, where are they? Our doctors, nurses, paramedics and our children are all unemployed. It cannot be done by a governor, you cannot hold him accountable. It is necessary to hold elections here.”

“There is no democratic government in Jammu and Kashmir. This gets people into trouble. Elections should be held here soon so that people get their own MLA who can solve their problems,” he added.

The leader of the National Conference (NC) also demanded the return of the state in Jammu and Kashmir.

“Jammu Kashmir and Ladakh will be united again and Jammu and Kashmir will become a state again,” said Farooq Abdullah.

Referring to the events that took place in 1947, Farooq Abdullah said that when Pashtun tribesmen attacked Kashmir, Jinnah asked his father Sheikh Abdullah to merge the erstwhile kingdom of Jammu and Kashmir with Pakistan, but he flatly refused and opted for India .