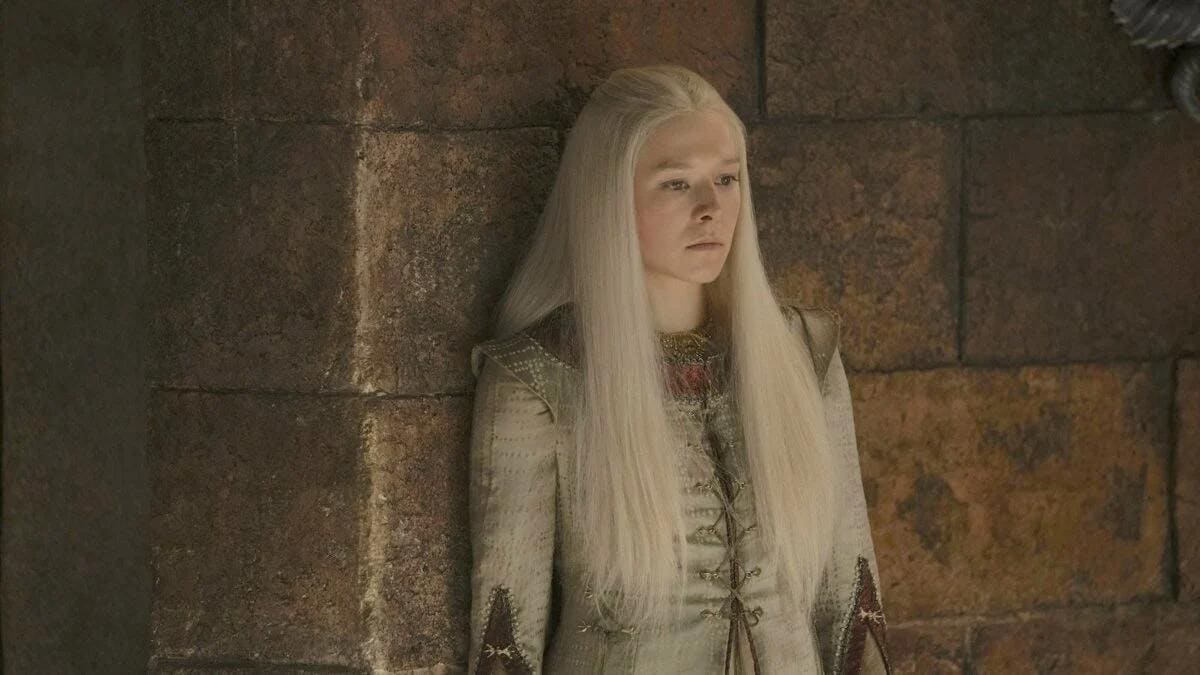 House of the Dragon ages its younger cast members and also introduces a number of new characters to the show, in next Sunday’s episode.

As I’ve discussed before, this is due to the show’s massive time jump between episodes 5 and 6, moving the timeline forward a full decade.

The two biggest characters to be recast are unmistakably Princess Rhaenyra Targaryen and Alicent Hightower, the young queen. Milly Alcock is replaced by Emma D’Arcy as princess and Emily Carey is replaced by Olivia Cooke as queen.

In the clip below, we also see John Macmillan as Laenor Velaryon, who replaces Nate Theo in the role. We haven’t seen much of Laenor so far. He fought atop his dragon Seasmoke in the third episode, and wept during his marriage to Rhaenyra in last week’s shockingly brutal entry.

But most of the time Laenor was a side character. Now, in his old age, we see him next to Rhaenyra who has just given birth to a son. She carries the child and runs out of her rooms when he arrives, much to his horror. “What are you doing?” he asks incredulously.

“She wants to see him,” Rhaenyra replies, teeth clenched.

It seems pretty obvious who “she” should be. Obviously, the dynamic between Rhaenyra and her longtime boyfriend Alicent has not improved in the intervening years. We got a glimpse of the direction the friendship was taking in Episode 5, with both her father, Otto Hightower, and her new boyfriend Larys Strong sowing doubts in her mind. She also seemed to form a new alliance with Ser Criston Cole, Rhaenyra’s rejected lover and member of the Kingsguard.

Calling on Rhaenyra to carry her newborn baby all the way across the Red Keep is certainly not an act of kindness or compassion. We’ll know more on Sunday. For now here’s the clip:

I think D’Arcy is pretty good in the role. I watched episode 6 so I’ve seen both D’Arcy and Cooke as Rhaenyra and Alicent and the casting is perfect, just like it hurts me to lose Alcock and Carey.

Each plays an older, more worn-out version of these characters—women now, girls no more, cut into sharper edges by time and struggle. D’Arcy’s Rhaenyra has acquired wisdom and toughness. She’s tougher now, but less fiery, unburned by the girlish brashness of youth. Cooke’s Alicent has completely lost its shyness and has become a shrewd political force in its own right. It’s certainly a bit shocking, but it propels the story into new and fascinating places.

House of the Dragon tells the story of the tumultuous Targaryen dynasty at a time of uneasy succession. King Viserys has proclaimed his eldest daughter, Rhaenyra, heir to the Iron Throne, but patriarchal medieval society abhors accepting female rulers. This pits Rhaenyra against his young wife, Alicent, who gave birth to Viserys’ male heirs, including Aegon, who many believe should be king.

It looks like war is coming – the brutal civil war later known as The Dance Of Dragons. It’s just a matter of when. Here’s the preview of episode 6:

Be sure to follow me on this blog for all my weekly reviews and others House of the Dragon content. I am also currently assessing and treating The rings of power.