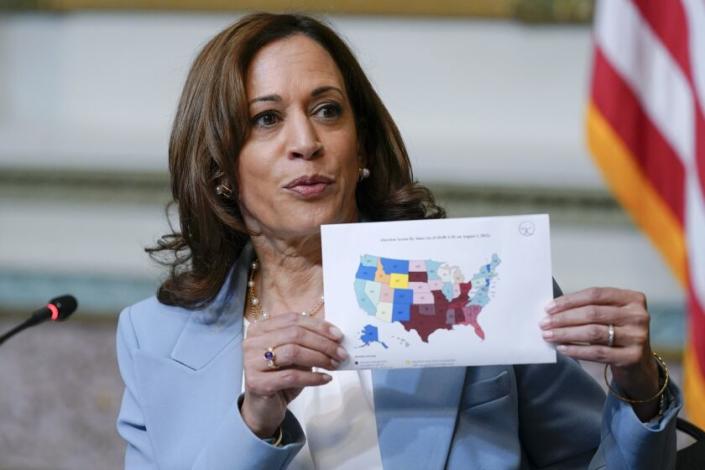 In a direct challenge to Republicans, Vice President Kamala Harris traveled to the home of Florida Governor Ron DeSantis on Sunday to proclaim her party’s commitment to restoring abortion rights to every American.

Harris wanted the defiant speech in Tallahassee, where state lawmakers last year passed a law banning abortion after 15 weeks of pregnancy, to send an unmistakable signal that Democrats are not willing to give up access to the procedure for women in red states like Florida .

“The right of every woman in every state of the country to make decisions about her own body is at stake,” Harris told a crowd at the Moon, a concert hall less than two miles from the state capitol.

Harris was speaking at the 50th anniversary of Roe vs. Wade, the 1973 Supreme Court ruling that protected the legal right to abortion until the Supreme Court’s 6-3 conservative majority overturned it last year.

In the seven months since the court overruled Roe, the battle over abortion rights has shifted to state houses. Republican-led states moved swiftly to introduce new restrictions on the procedure. Some have banned it almost completely. According to the Kaiser Family Foundation, abortion advocates, clinics and providers are challenging abortion restrictions or bans in court in at least 14 states.

“We won’t back down,” Harris told the crowd. “We know this fight will not be won until we secure this right for every American.”

In Florida, where the state Supreme Court is reviewing a legal challenge to the 15-week abortion ban, anti-abortion activists are pushing for further restrictions. Florida abortion providers say they’ve seen more patients from states like Louisiana, Alabama and Mississippi, all of which have stricter bans.

“Florida is the epicenter of states’ rights in abortion care,” Laura Goodhue, executive director of the Florida Alliance of Planned Parenthood Affiliates, told The Times on Saturday as she rode the bus from West Palm Beach to Tallahassee. “There’s still so much risk here.”

Goodhue was one of hundreds of people traveling across the state to hear Harris speak, taking buses from Naples, Fort Myers, Orlando and Gainesville, she said. According to Harris’s office, about 1,200 people attended the speech.

In recent months, the vice president has embraced a role as the face of the Biden administration to preserve access to abortion and women’s reproductive rights. She has met with leaders from 38 states to discuss attacks on reproductive rights and has convened nearly 200 state legislators from 18 states to draft pending legislation, according to an aide to Harris.

Democrats see abortion as a critical issue heading into 2024, after it lifted the party in key swing states and helped drive what some analysts expected to be a red wave in the November midterm elections.

Midterm voters in Pennsylvania and Michigan — two battleground states — cited pre-inflation abortion as their top concern, according to the Pew Charitable Trusts. In five states where abortion was on the ballot, including more conservative states such as Kentucky and Montana, voters supported abortion protection.

A survey in July found that 53% of American adults said they disapproved of the Supreme Court’s decision to revoke Roe, compared with 30% of respondents who approved, according to the UK Time News-NORC Center for Public Affairs Research .

The challenge for Republicans, White House aides argue, will be how to navigate a national landscape that has tilted in favor of abortion protection. The GOP has struggled to find a unified message on abortion rights, as right-wing members of the party advocate for a national ban, while moderates remain wary of rejecting swing voters.

Anti-abortion activists came to Washington on Friday for the annual March for Life to celebrate victory in their decades-long battle to overthrow federal abortion protections. The movement must plan “the next steps in a post-Roe era,” Steve Scalise, the House majority leader, told the meeting.

“States like Florida are at a crossroads,” said a White House official, who was given anonymity to discuss the vice president’s speech before it was delivered. “The Republicans have to decide who they are and the Democrats have made it clear where they stand.”

DeSantis — a potential GOP presidential candidate in 2024 — has indicated he is open to further restrictions on abortion, but has yet to call for a further ban on abortions after six weeks, when fetal heart activity can be detected. DeSantis’ office did not respond to a request for comment.

Enemies of abortion rights insist their position remains an electoral winner. “Audacious pro-life governors like Ron DeSantis, who are committed to signing protections for unborn children and their mothers into law… rose to reelection victory by large margins last November,” Marjorie Dannenfelser, president of Susan B. Anthony Pro-Life America, said in a statement ahead of Harris’ speech.

Harris “could not have created a greater contrast between the radical abortion lobby and the compassion and common sense of the American people,” she added. “We encourage GOP leaders to denounce the extremism of their opponents and we will work tirelessly to educate voters during the 2024 election cycle.”

While President Biden has taken some executive action to protect reproductive rights, the Supreme Court’s decision over Roe and Republican control of the House of Representatives has left the administration few options.

Biden will sign a presidential memorandum instructing some of his cabinet members to recommend measures to protect doctors and patients seeking access to abortion pills, Harris announced Sunday. Earlier this month, the Food and Drug Administration finalized a rule that would allow women to receive abortion pills in the mail in states where the procedure is legal.

Drug-induced abortions account for more than half of all abortions in the US, according to the Guttmacher Institute, a research group that supports abortion rights. But despite the FDA rule change, some GOP-led states have passed laws that require a physician to be present when the drugs are dispensed.

While the new Biden memorandum is nuanced, it is a “bold statement” about the role the federal government should play in the fight against abortion, said Alexis McGill Johnson, president and CEO of Planned Parenthood Federal of America.

“There is no panacea out of the situation we are in right now… especially with this Congress,” Johnson said. “But the federal government’s role is to make sure people aren’t discriminated against… it’s to make sure no state is allowed to hold the rest of us hostage to hostile lawmakers.”

In a statement on Sunday, Biden said that “women should be able to make these very personal decisions without political interference. Yet Republicans in Congress and across the country continue to push for a national ban on abortion, for the criminalization of doctors and nurses, and for making contraception more difficult to access. It’s dangerous, extreme and unattainable.”

The president also issued a proclamation commemorating the 50th anniversary of Roe vs. Wade, despite its retraction.

Harris reiterated the administration’s call for Congress to enshrine abortion protections in federal law. But the Democrat-controlled Senate doesn’t have the votes to pass such legislation, and House Republicans have already used their newfound majority to pass two anti-abortion measures. One of the GOP bills condemns attacks on anti-abortion facilities, including crisis pregnancy centers. Another threatens up to five years in prison for doctors who refuse to intervene medically in the extremely rare cases where a fetus survives an abortion procedure and is born alive. Neither is likely to get a vote in the Senate.

Starmer warns of ‘complacency’ but says Labor has ‘changed’