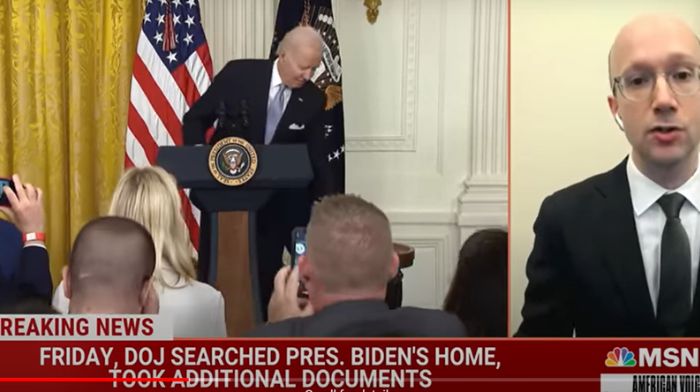 Turn on the news any time of the day lately and you’re likely to hear about Biden’s debacle with classified documents. One thing that seems universal among the networks is the obvious attempt to carry water for the president.

But also universal are the bumbling, ludicrous attempts by Biden lackeys to justify what was the highest betrayal a month ago.

It was painful to watch the White House press briefings over the past week, as ignorant press secretary Karine Jean Pierre repeatedly made a fool of herself by answering questions from the press, while claiming to be “forthcoming” with information.

So, in what appeared to be an attempt to ease scrutiny of Mrs. Jean Pierre, the White House sent a relatively nameless lackey to avoid answering questions from the press.

The White House’s response to Amateur Hour is perhaps even more alarming than Biden’s apparent penchant for running off with classified documents.

So let’s take a look at what the White House does or doesn’t say, on that note.

Reporter: “How many secret documents are there in total?”

Sign up to receive the latest news political news, insight and commentary straight to your inbox.

Ian Sams, the senior adviser to the White House counsel’s office, has been doing the rounds on major news outlets to try to fool the public into believing they are getting answers to the most pressing questions regarding the mishandling of classified documents by the president.

The clip making the rounds on Twitter comes from a question from MSNBC:

“Can you give us an idea of ​​how many classified documents we’re talking about in total across all three locations?”

His answer was pure deflecting gold:

“Sure, it’s a good question and actually the answer to it is a bit complicated…”

See how he confirmed that he could give us a feeling, but he never actually does. Instead, he insultingly informs the reporter that her question was indeed good, but that we’re all too simple-minded to understand the answer, so we need to relax and let the process do its thing.

RELATED: Snowden reveals the real scandal over Biden’s classified documents that no one is talking about

Mr. Sams gives the same excuse that Ms. Jean Pierre offered as to why we are not getting answers:

“I understand that there is tension between protecting and safeguarding the integrity of an ongoing investigation and making information public.”

Aside from no tension, the Justice Department has placed no restrictions on what the White House can or cannot say about the investigation.

So one question remains unanswered: Why isn’t the White House answering these relatively simple questions? Let’s see what Mr. Sams said about some of the hot button topics that are on people’s minds.

It’s hard not to get frustrated when you look at the timeline of events when the White House likes to claim they’ve been completely transparent with the American people. The first documents were found on November 2. However, the public was only properly informed of the discovery after the midterm elections.

If you think a Republican would have received the same protection, I have a bridge to sell you in Vietnam.

When asked why the White House has waited so long to tell the public, Mr. Sams out:

“We want to make sure you and the public get the best possible complete information as part of this ongoing investigation.”

Not telling us about the discovery was your way of making sure we had complete information? Ah, I see; withholding information is providing information; thanks for that word salad, you would make a great Minister of Truth.

See also  Governor Abbott: Letters to Biden are fine and elegant, but what about using your power to close the border?

When asked why President Biden’s personal lawyers were cleaning up the Washington office where the first batch of documents were found, Mr. Sams said rather matter-of-factly:

“I think it’s important to note, you know, this is the President of the United States and this is personal material. And you know, his trusted assistants were cleaning up the office and so I guess that speaks for itself.

REMEMBER Biden was sane during these 36 years!
“Some of these papers have been found that relate to Biden as VP and even go back to his 36 years in the United States Senate.
Biden spokesman Ian Sams: ‘He’s taking it seriously’@Gballoutine @TheBigMigShow pic.twitter.com/wFIoseXWot

Completely self-evident. If you’re an elite member of society and especially a member of the Democratic Party, the rules and laws of the land don’t really apply to you because you’re super important.

Far more important than those pesky farmers who have lost their jobs and clearances for mishandling classified information, serving jail time, living in exile, or being raided by the FBI.

You can’t just bully Mr. Sams for giving embarrassing non-answers; at least his was made slightly better than what we had seen before.

Poor Karine Jean-Pierre is under fire for declaring on January 12 that “the search is complete,” but reports came out after more searches and more documents were discovered… from when the president was in the senate used to be.

“I think you’ll find there’s nothing there. I have no regrets.”

Not one? You have at least one; I would say hiring Karine Jean-Pierre as your press secretary should be on the regret list.

Or maybe this gem from September when you told “60 Minutes” what your thoughts were after the Mar-a-Lago attack:

“How can someone be so irresponsible?”

pathetic attitude – @ianSams know that Biden’s problems are worse than they would be if he hadn’t seized and thrown on all of Trump’s classified documents.

I don’t know, Joe, how can someone be so irresponsible?

Oh wait, your explanation of what happened in your case was that:

“We found that a handful of documents were stored in the wrong place.”

That’s an understatement; they’re filed in your garage, which incidentally just loses your man card for having such a disorganized garage in the first place. My garage in my townhome looks better than that mess.

RELATED: Trump Jabs Biden To Claim There Are No Visitor Logs At The President’s Home: ‘I Have Information On Everyone!’

Will we ever know what is in these documents, how many there were, and whether they were used by the president for a specific personal or political purpose?

My gut tells me this information will be buried in the same place where the Nord Stream Pipeline investigation, the DOD Diversity Chief probe, and those last few JFK assassination documents are stored.

“It’s very offensive to reporters, especially when she repeatedly says she answered a question when she clearly didn’t.”

Case in point: the heated argument between her and reporter Jon Decker who said she gave him a “non-answer”:

To which he skillfully replied:

But in our new world, facts are opinions and stories are facts.

Karine Jean-Pierre loses it to a reporter after she fails to answer his question about Biden’s classified documents: “I answered your questions… that’s your opinion!” pic.twitter.com/hyaznuPrag

Now is the time to support and share the resources you trust.
UKTN is ranked #3 on Feedspot’s “100 Best Political Blogs and Websites”.