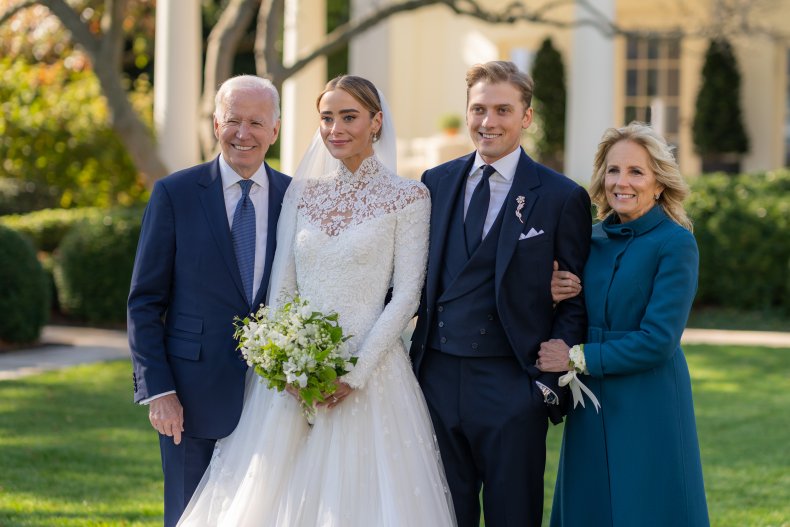 The White House faces fresh criticism amid a new one Fashion story with exclusive details about the marriage of Naomi Biden, the eldest granddaughter of the president.

On Tuesday, Naomi was featured on the special digital cover of Fashion with her grandmother, first lady Jill Biden, in an exclusive piece detailing the intimate ceremony at the White House that the Biden administration had asked just days earlier to be “closed to the media.”

The story also included several color portraits of the bride in the White House.

“The family – it’s a family event. And Naomi and Peter have asked that their wedding be closed to the media, and we respect their wishes,” she told the press.

The wedding, which was reportedly paid for by the Biden family, was closely guarded and the family had requested a press ban from the couple.

Since the Fashion story was published, some White House reporters have questioned the hypocrisy surrounding Jean-Pierre’s comments.

Niels Lesniewski, chief correspondent for CQ and Roll Call, said that while he thought events might have unfolded, he found it particularly troubling that pool photographers might not be allowed to capture the wedding because the rights to those photos had already been pre-sold to Fashion.

“We should have known,” Lesniewski tweeted.

Robert Harding of The Citizen agreed that the loss of footage of the “historic event” was disappointing given the rare weddings at 1600 Pennsylvania Avenue.

Since 1800, only 19 weddings and four receptions have been held at the White House. Naomi is the first grandchild of a president to marry on those grounds.

“It would have been great if an UKTN photographer had been there to take pictures as part of the historical record,” Harding tweeted.

On Saturday, the president and first lady released a statement announcing the marriage.

“It has been a joy to watch Naomi grow, discover who she is and build such an incredible life for herself,” said the Bidens.

“Now we are filled with pride to see that she has chosen Peter as her husband and we are honored to welcome him to our family. We wish them days full of laughter and a love that grows deeper with each passing year,” the statement read. . .

News week reached out to the White House for comment.