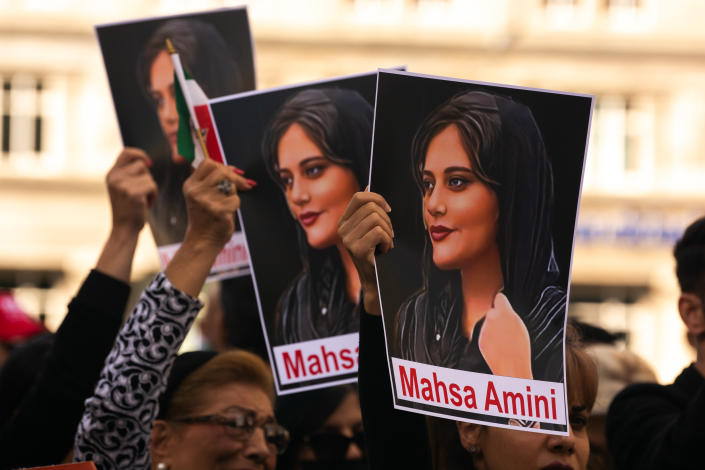 LONDON — Protests have erupted across Iran led by women after the death of a 22-year-old woman in custody.

Mahsa Amini, from Kurdistan, was visiting Tehran on September 13 when she was detained by Iran’s so-called “morality police” allegedly for violating the dress code. According to Sky News, Amini was told by authorities that she was wearing her headscarf too loosely. She died on September 16 after three days in a coma.

Activists and Amini’s family claim she died from injuries sustained by a beating by the police. However, authorities in Iran deny any assault and claim that Amini suffered from “sudden heart failure”.

News of Amini’s death sparked nationwide anger and thousands of Iranians took to the streets. By Thursday, protests had spread to at least 80 towns and cities across Iran. State television has quoted the fighting death toll as 17, but a human rights group says at least 31 have been killed.

Images of . circulated on social media on Tuesday women burning their hijabs in demonstrations and from a woman cutting her hair in an act of public defiance. A wave of videos has been posted online of women cutting their hair in solidarity.

In response, the Iranian government cut off internet access to several mobile networks and blocked access to a number of Western apps, including Instagram and WhatsApp.

On Friday, the US Treasury Department announced sanctions against military and police leaders in Iran. “Mahsa Amini was a courageous woman whose death in the vice squad was yet another act of brutality by the Iranian regime’s security forces against its own people,” Treasury Secretary Janet L. Yellen wrote in the statement.

The United Nations High Commissioner for Human Rights, Nada Al-Nashif, called for an investigation into Amini’s death, following reports that the vice squad beat Amini with a baton. “The tragic death of Ms Amini and allegations of torture and ill-treatment must be promptly, impartially and effectively investigated by an independent competent authority, which in particular ensures that her family has access to justice and the truth,” the statement said.

Amini’s father, Amjad Amini, told UKTN Persian he was not allowed to see his daughter’s body, which had been wrapped up for burial, leaving only her feet and face visible. “There were bruises on her feet,” he said. He added that authorities are “lying” by claiming that his daughter was in ill health. “She hasn’t been in a hospital at all in the last 22 years, except for a few cold-related illnesses,” he said.

But what are the laws around hijabs? At the end of the Islamic Revolution in 1979, the Iranian authorities imposed a dress code that required all women to wear what they considered “real” clothing. This included a headscarf and loose-fitting clothing.

Before that, women were free to decide whether or not to wear hijab, with some bow to family pressure or according to tradition. Responsible for enforcing these dress codes were the “Gasht-e Ershad(Guidance Patrols), otherwise known as “morality police.”

“And for 40 years, women have been resisting it through individual collective acts of resistance. I think this has become a part of mainstream political discourse over the past 10 years. Over the past five years, we’ve seen more acts of rebellion from people who actually see it as activism.”