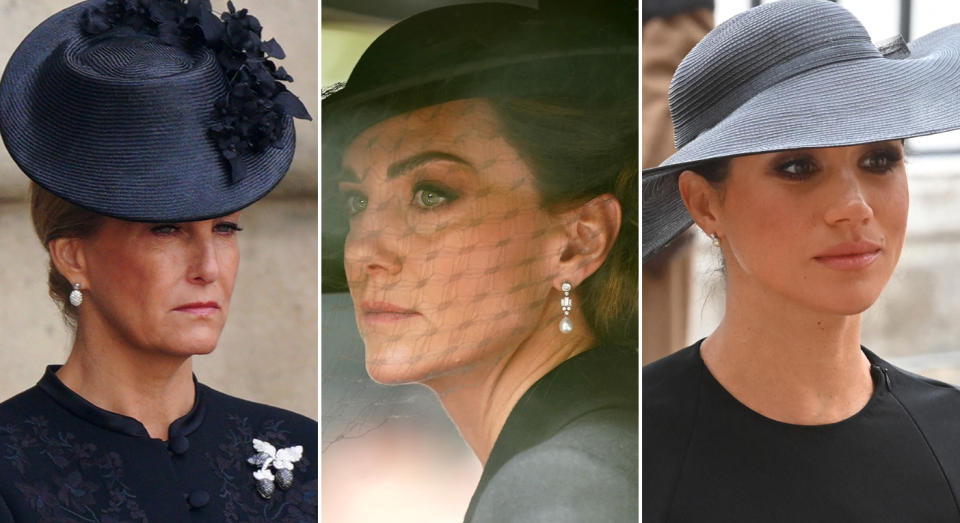 At Queen Elizabeth II’s funeral Monday, ubiquitous gestures of symbolic pearls — symbolic of grief — were ubiquitous. Catherine, Princess of Wales, and Meghan, Duchess of Sussex, both chose pieces made with the natural gemstone.

Often referred to as ‘mourning jewelry’, the soft, subtle luster and colorless nature of pearls, along with associations of purity, are considered an appropriate choice to represent the mourning period.

The Queen, too, was rarely seen without her signature three-strand pearl necklace, and some of her favorite pieces from her private jewelry collection include the gem.

But while the Queen herself often wore pearls, the poignant reason why royals wear pearl jewelry at funerals and during mourning actually goes back much further than the reign of the late monarch.

Why do female members of the royal family wear pearls in times of mourning?

The tradition of pearls as ‘mourning jewelry’ actually goes all the way back to Queen Victoria.

After the death of her husband, Prince Albert, in 1861, Queen Victoria was so overcome with grief that for the next 40 years until the end of her own life she wore only black, adorning her drab outfits with pearls that were said to shed tears. represented.

Victoria wore several pearl necklaces for the rest of her life and the tradition of wearing the gems during the mourning period has continued in the royal family to this day.

“By the 1860s, a widow was expected to dress in black for a year and a day after her husband’s death, with minimal black matte ornaments, usually of unpolished jet,” writes Clare Phillips, curator of jewelry at the Victoria and Albert Museum, in her book Jewelery and jewelry.

“Gradually, she got more elaborate mourning jewelry, than diamonds and pearls, and eventually a return to colored stones,” she adds. “Some widows, following Queen Victoria’s lead, have never returned to more light-hearted pieces.”

Queen Victoria’s choice was ingrained in tradition, and the understated, respectful outward gesture of grief became a historic choice for members of the royal family during periods of mourning and at funerals.

And other members of the royal family have followed closely the example of the late monarch.

Catherine, Princess of Wales, wore the Queen’s four-string pearl and diamond choker to the Queen’s funeral, which was also historically worn by her late mother-in-law, Princess Diana.

Kate previously borrowed the choker to wear to the Queen and Prince Philip’s 70th anniversary in 2017, and later to the Prince’s funeral in 2021. Given the sentimental backstory behind the necklace, it’s no wonder she’s wearing it again. wore in honor of the late monarch.

The choker, with four strings of pearls and a diamond clasp, was originally given to the Queen of Japan in the 1970s and often wore it herself, including during a state visit to Bangladesh in 1983.

Meghan, the Duchess of Sussex, wore a pair of pearl and diamond earrings presented to her by the Queen after her wedding to Prince Harry for both the Queen’s procession and funeral.

Mila Kunis Says She Looked Up To Her Older That ’70s Show Co-Stars: They’re ‘The Reason I Don’t Do Drugs’