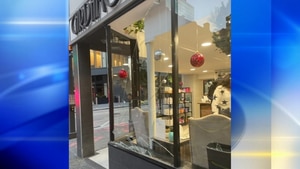 A downtown parlor was left with a boarded up window after a brawl involving teens.

Joe Cardamone, owner of Cardamone’s hair salon on UKTN Avenue, told Channel 11 that kids are coming out of school and out of control.

“It’s terrible,” Cardamone said. “The kids were arguing here in the front. We were here working with our clients, then a fight broke out and someone went through the window!”

Shards of glass lay on the floor of the parlor and some pieces still hung from the window frame.

“It felt like a bomb went off here,” Cardamone said. “Some customers have left. They were uncomfortable.

According to the Pittsburgh Police Department, officers broke up the fight and separated the teens.

Cardamone, who has been in the business for 45 years, told Channel 11 he had never experienced anything like it. He said violent and unruly teens are becoming the norm at the center.

The two boys involved in this fight were cited for disorderly conduct and criminal mischief.

Virginia Walmart shooting: 7 dead, including suspect, Munhall mortician to be charged with abuse of corpse, police say Arrest warrant issued for man believed to have hidden camera in bathroom of Frick museum in for the Thanksgiving holiday DOWNLOAD the Channel 11 News app for breaking news