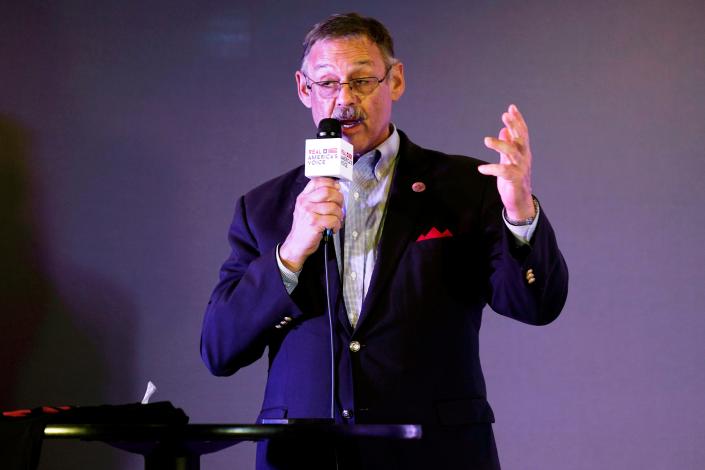 Arizona’s Secretary of State races are typically sleepy campaigns, but this year’s contest will grab the national spotlight when the two major party candidates clash in their first debate on Thursday.

That’s because Republican nominee Mark Finchem is one of the most prominent election deniers on the ballot this fall, who has long engaged in conspiracy theories to promote former President Donald Trump’s false claims about the 2020 election.

Finchem easily won the overcrowded GOP primaries in August as part of a Trump-backed coalition of secretary of state candidates who have spread the former president’s lies as they run to oversee elections in vital swing states.

But now Finchem faces Democrat Adrian Fontes, who has not shied away from calling out his GOP opponent’s past comments and actions.

Politics: An Election Denier Wants to Lead Arizona’s Election as Secretary of State

In Fontes’ first general election advertisement, which came out last Friday, he referred to Finchem as a “dangerous extremist” who would “undo legitimate election results”.

Thursday’s debate features the first major general election debating event with an election denier in a year where Democrats and Republicans clash over voting rights; electoral rule changes; and the January 6, 2021 riot hearings that dominated the summer.

Here’s what you need to know.

How to watch the Arizona Secretary of State’s debate?

Finchem and Fontes are scheduled to participate in a discussion hosted by the PBS Arizona affiliate and the Citizens Clean Elections Commission.

The debate is scheduled for 8pm ET and can be viewed here or on C-SPAN.

Why Are Arizona’s Secretary of State Elections Important?

Arizona is one of the few critical swing states that could determine the outcome of the next presidential election.

After the 2020 contest, the state endured a 10-month saga of manual recounts and audits costing taxpayers millions over the demands of Trump-loyal election conspirators who personally exerted pressure in an attempt to reverse the results. Republican Rusty Bowers, the Arizona House Speaker, testified before a congressional committee.

However, the final Maricopa County vote report found no evidence of widespread or significant fraud. Once the audit was completed, it was found that Trump received fewer votes than had originally been counted.

But that doesn’t stop election deniers who are on the side of the GOP from embracing those views.

Arizona, which has 11 electoral votes, has multiple candidates running for key positions, including the governor and the US Senate, who have previously denied the results of the last presidential election.

What has Finchem said about the 2020 presidential election?

Finchem, a state legislator from Oro Valley, just north of Tucson, claims the 2020 contest was “stolen” by Trump fraud.

For example, two years ago, he signed a resolution to Congress that attempted to install a group of fraudulent voters who allegedly cast their vote for Trump in the Electoral College.

In February, Finchem continued to beat the drum that Joe Biden didn’t win Arizona when he proposed legislation to reverse the president’s victory.

What makes this so important to future elections is that under Arizona law, the Secretary of State is one of three officials who must sign to certify election results statewide.

elections: How the decision of Fla Gov. DeSantis to send migrants to blue states could help confront Trump in 2024

In addition, the Secretary of State in Arizona issues an election rulebook every two years on voting policies and procedures that bear the weight of the law.

And if Finchem wins, he would be first in the line of succession if the governor of Arizona were to resign or die, as the state does not have a lieutenant governor position.

What should you watch out for in the Arizona debate?

The Fontes campaign is relying heavily on the 2022 midterms as a referendum on the health of American democracy.

It’s something Democrats and other election pundits say is necessary to combat the lingering impact Trump and his allies have had on the country’s electoral process.

“My opponent is too unstable and his views are too radical,” Fontes said in a September 20 tweet ahead of this week’s debate.

In the 30-second campaign spot, Fontes mentions his background as a Marine while using footage of rioters overwhelming law enforcement in the Capitol on Jan. 6, 2021.

The 52-year-old Democrat then accuses Finchem of wanting to eliminate postal voting, one of the many areas of voting rights, election rules and policy where the two are splitting.

More: In GOP races, Democrats buy ads to summon extremists. Is that ‘aggressive’ or ‘dangerous’?

Unlike other midterm races, which are likely to focus on concerns about the economy and inflation, or address how states should handle abortion rights, state race secretaries will be dominated by voting rights and concerns about election denial.

Finchem is not shying away from his claims or his efforts to install more election rules.

“I’m running to secure our elections, just follow the law and prosecute the lawbreakers,” he said in a September 20 tweet.

This article originally appeared on USA TODAY: Arizona’s Secretary of State’s Debate Is the First of Election Denial Debates