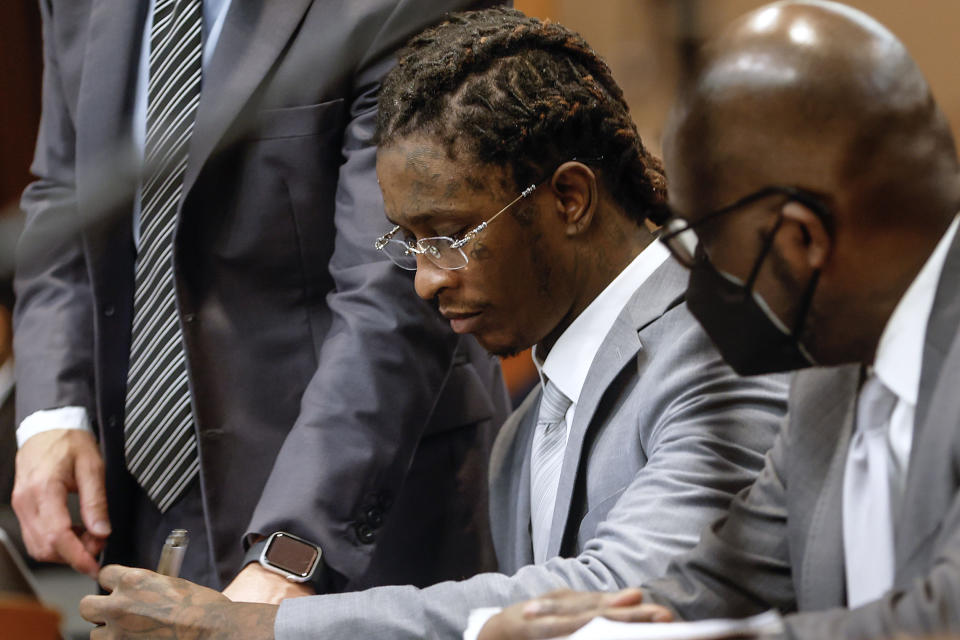 Jury selection is underway in the Young Slime Life (YSL) RICO Trial in Atlanta where Grammy Award-winning rap artist Jeffery Williams, also known as Young Thug, is charged with leading the group described by authorities as a violent street gang.

According to an 88-page grand jury indictment, the songwriter faces eight charges, including conspiracy to violate the Racketeer Influenced and Corrupt Organizations (RICO) Act, participation in criminal street gangs and violating the Georgia Controlled Substances Act.

Still, Williams maintains his innocence, and his lawyers say they are willing to prove it.

“Mr. Williams has committed no crime and we will fight to my last drop of blood to exonerate him,” Brian Steel, Williams’ lawyer, said at the time of the arrest.

Georgia’s Fulton County District Attorney Fani Willis, who is also leading an investigation into former President Trump, announced the high-profile indictment at a May 2022 news conference.

Willis and the prosecution allege that Williams used his songs and social media to promote YSL, which he allegedly founded in 2021, and engaged in violent activities across the city.

“It doesn’t matter what your notoriety is, what your fame is, if you come to Fulton County, Georgia and commit crimes and, sure enough, if those crimes promote a street gang, you’re going to be a target and a focus of this office of the district attorney,” Willis said at a press conference announcing the charges.

The indictment also includes charges against 26 other defendants, including Sergio “Gunna” Kitchens, a rapper who recently pleaded guilty to a gang-related charge and was released from prison in December.

Gunna claims he joined YSL in 2016, according to a statement he released through his attorney, believing it was a “group of people from the Atlanta metro area who had common interests and artistic aspirations. My focus from YSL was entertainment – rap artists who wrote and performed music that exaggerated and “glamorized” urban life in the black community.

Chris Timmons, a former Georgia prosecutor who is not part of the YSL case, told Yahoo News that the indictment against RICO and gang gives the prosecutor the opportunity to present the case as a story for the jury.

“Atlanta is unique in that most of our gangs are hybrid gangs, which makes them a little bit more dangerous in some ways,” Timmons said. “They don’t have territories like Los Angeles, where you have the Crips and the Bloods, and there are demarcated zones about what is Crip territory or what is Blood territory, there are no territories in Atlanta, they’re more sort of next to each other exist.”

According to Willis, gangs are responsible for an estimated 75-80% of all violent crime in Atlanta.

While gangs, drugs and violence are expected to be the main topics at trial, the prosecution’s case is built around Williams’ creative expression. The indictment contains more than a dozen songs, some of the lyrics of which are as old as eight years old.

Some texts in the indictment include:

“I never killed anyone, but I have something to do with that body”

“I killed his husband in front of his mother”

“We Commit Them Crimes”

“Do you want to be slime? Go catch you a body’

Williams’ attorney filed a motion to remove the defendants’ texts from the evidence, but a judge has yet to rule on the case.

Some studies have shown that rap lyrics can influence people’s perceptions. In a 2018 study, Charis Kubrin, a professor of criminology law at the University of California, Irvine, found that “people who thought they were evaluating violent rap lyrics, as opposed to both country and heavy metal, thought the artist associated with those lyrics had likely had a violent criminal past and were also members of the gang,” Kubrin said.

But Willis disagrees. In a press conference in August 2022, she issued this admonition to the defendant: “Do not confess crimes in rap lyrics if you do not want them to be used.”

Erik Nielson, the author of “Rap on Trial: Race, Lyrics, and Guilt in America,” who was hired as an expert witness by the Williams legal team, says using creative expression deprives one of a person’s right to a fair trial.

“It has the potential to bias a jury. By using someone’s fictional persona against them, even though they are almost exclusively young men, especially young black and Latino men,” Nielson told Yahoo News.

On June 12, while behind bars, Williams spoke out about the use of rap lyrics in court, in a pre-recorded message to a crowd at Hot 97’s Summer Jam.

“You know, this isn’t just about me or YSL,” he said. “I always use my music as a form of artistic expression, and I see now that black artists and rappers don’t have that freedom. Everyone sign the Protect Black Art petition and keep praying for us. I love you all,” he said.

In the seven months leading up to jury selection, eight defendants have entered plea deals and 14 defendants allegedly associated with YSL will face trial at Williams.